Remember how I talked about Quantum and Woody #7 being a trippy experience? Wel,l the saga continues with our heroes, Eric and Woody Henderson waking up from their surreal world journey. After failing to touch wrists, Eric and Woody were stuck in a world of their own creation that quickly devolved from a dream to a nightmare. By indirectly touching wrists, they luckily find themselves back in the real world, yet are immediately faced with the prospect of fighting a biker gang…as normal human beings. Somehow when Eric and Woody traveled, they seem to have lost their wristbands and their superpowers, but worse yet, they may have brought something sinister from that other world back with them. 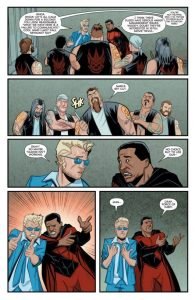 Whereas the last issue pointed out the personality differences between Eric and Woody, this issue puts shows how their brotherly bond balances well for the dialogue and comedic elements throughout the story. The writer Eliot Rahal does an excellent job of not focusing too much on one character or the other, instead of letting the characters “voice” really come through within each panel. The way in which Eric’s unwavering steadfastness gets the duo into just as much trouble as Woody’s goofy personality is a clever spin on the balancing act one sees when fights are usually provoked in similar situations.

Artistically, I was not as thrilled with this style as the last one. Granted, it is hard to take this issue as its own work because we have the last issue to use as a comparison model. After seeing such specific detail in the last issue, this one felt a bit more traditional in nature. The scenes are clear, and expressions are conveyed well, but the specific detail of texture and attention to the little things gets lost a bit. For example, background elements are very sparse, which is meant to draw the eye toward the action in the scene, but a little crisper detail could have gone a long way to make this issue more memorable. Still, this is professional work and there are no technical flaws here in the drawing or in the coloring. I am excited to see where Valiant Entertainment takes the next issue of Quantum and Woody. And don’t forget, you can find issue #1 for free here.