An Interview With The Gentleman #1: Darkness of the Void Writer Greg Anderson Elysee
0 Comments

The Gentleman #1 is the 3rd SFC Comic comics solo series, published by Evoluzione Publishing. This will be a 32-page comic written by Greg Anderson Elysée of the graphic novel  Is’Nana: The Werespider series, drawn by Massimialiano Veltri of Marvel Comics and Titan Comics, with colors by Marco Pagnotta of SFC and Kasai.  A Lovecraftian inspired horror noir story about the haunting ghosts from the past along with the ghosts from the forth coming future.

In this 4 Part miniseries, The Gentleman finds himself drawn to Espere St. Lanmé, mysterious and alluring, seeking help and protection from a being of possibly supernatural origins. Unfortunately to protect her, Oliver must succumb to his special abilities, a hereditary curse that uses his body as a key and vessel to the Void, an ancient evil with the means to destroy all life as we know.

Can Oliver protect Espere without losing his humanity? And if he can, can she be trusted? What is her connection to Oliver and the Void itself?

I spoke with the author of The Gentleman, Greg Anderson Elysée. Elysée is a Brooklyn, NY born Haitian-American writer, film-maker, model, and teacher. He runs a column on Outhousers.com named (Heard It Thru) The Griotvine where he showcases independent creators of color and LGBTQ creators while presenting his thoughts on diversity. Is’nana: The Were-Spider is his first comic. This year’s projects for Mr.  Elysée will also include Is’nana the Were-Spider, Vol. 2,  and a story in Lion Forge’s Puerto Rico Strong. 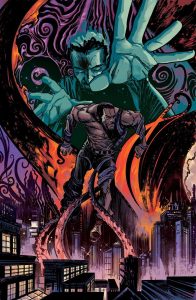 Kenesha Williams: I was really excited when I saw your Kickstarter for your horror comic, “The Gentleman”, can you give us a synopsis of the story?

Greg Anderson Elysée: I’m excited you’re excited! The Gentleman: Darkness of the Void is a Lovecraftian inspired horror noir about a former superhero who’s now retired as a private investigator. He’s cursed with a heart that serves as a lock and vessel to an ancient evil called The Void. It’s a hereditary curse that’s been passed down his lineage for generations. The more he uses his special abilities, the more the curse spreads throughout his body, thus weakening the lock. Espere St. Lanmé is the femme fatale who gets introduced to the Gentleman by his ex-boyfriend from a previously failed triad relationship, and she may hold the key to his heart.

KW: I know that this is a Lovecraft inspired story, what made you want to tackle a Lovecraftian type of monster? Were you a fan of Lovecraft?

GE: I was approached by Marcel Dupree, the creator of the character for his SFC Comic line, to develop a story for this character and he told me he wanted it to be a horror story. Given my love for horror and my work on Is’nana the Were-Spider, he felt I’d be a good fit. Upon digging into the character and his powers, it only seemed natural to sort of use Lovecraft as an inspiration, what with his themes of hidden horror and creatures buried underneath, gradually corrupting or causing a psychological breakdown of the characters around them and also the motifs of the worship of mysterious deities.

As for if I’m a fan, yes and no. Right when I was discovering Lovecraft and studying his style and work which really grabbed me, I was turned off shortly after learning about his racism, especially towards Black people and reading some of those works. I haven’t cared to read more since. Aside from that, concerning his style and skills, there’s a good reason as to why he’s considered a horror master.

KW: When you thought of this concept, were you doing it as a direct response to Lovecraft and his own racist overtones in his work and does the theme of racism come up in the story?

GE: Well I was initially coming up with the concept in terms of style and themes of the story. Lovecraft is the closest thing I can compare it to and I do feel weird sometimes using Lovecraftian to describe it. That’s why I’ve been jokingly telling people it’s Lovecraft without the racism. Well… not really joking, but you feel me. I don’t tackle the subject of racism in this story but there are some themes where race is important and presented subtly and sub-textually, like the misunderstanding of Black spirituality and how it’s used for fear.

But I do feel over time, I started using this as my “ha ha, in your face” story to him. Is that petty of me? 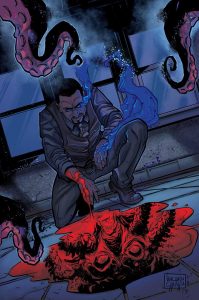 KW: One of the unique things about “The Gentleman” and another draw of mine to the character is that its main character is a black bisexual man which is not a character we typically see, especially in the black community. A lot of times, bisexuality is looked at more in the lens of the “DL phenomenon“ and there’s a lot of bisexual erasure, why was it important for you to show this type of character?

GE: Making Oliver (the Gentleman) bisexual was actually something both Marcel and I agreed on early on. Which was funny because when I was developing the story, I hadn’t told Marcel I was planning on doing so, but he hit me up and said, “By the way, I may want to make him pan or bisexual.” I laughed and said, “Already ahead of you!”

Honestly, I’m tired of bisexuality being the black sheep in terms of representation and within the LGBTQ community. While a Black lead in horror has been done before, like Blade and Spawn and films like Get Out and shows like Superstition, and while it’s still not as common as it can be, showcasing not only a man of color but also a queer man as a lead for a horror story is something I’ve never seen before and lends to something different for readers looking for something new.

Representation is important, and I want to give some voice or agency to people who tend to be “erased” from conversations and seen and portrayed in a negative light just for simply existing. Kind of like how Black spirituality has been bastardized. Representation of bisexuality when it comes to men is still seen as some sort of anomaly or “a phase” to closed minded individuals, so many stay closeted or never reveal their feelings for men and women. So, I want to make a hero who’s not afraid to be himself and showcase the strength of being a man in his truth and simply give those men out there, especially Black but not exclusively, someone they can appreciate in a weird, horror, surreal story that doesn’t typically highlight them in any way.

KW: Can we expect this to be an ongoing series?

GE: Right now, it’s a 4-issue mini-series. There’s currently no plans beyond that but who knows? Maybe the reception can help juggle some ideas for the team and I.

KW: How can we support the Kickstarter for “The Gentleman”?

GE: You can support the book by going into the campaign and backing the project. There are a few tiers and rewards to choose from. Also, for those unfamiliar with Kickstarter, you can still pledge and order your copy now and not have to worry about your money being processed. Your money will only be taken for the book at the end of the month when the campaign ends.

You can also spread the word, share it through your social media, tell a friend, etc.

KW: Where can we find you online?

KW: Thanks for letting me interview you for I Am Black Sci-Fi!

GE: Thank you for having me!

The Gentleman #1: Darkness of the Void has a May 31st funding goal date. You can support at Kickstarter – https://www.kickstarter.com/projects/782290703/the-gentleman-1-darkness-of-the-void

She took to heart the advice, “If you don’t see a clear path for what you want, sometimes you have to make it yourself,” and created a Speculative Fiction Literary Magazine featuring characters that were representative of herself and other women she identified with. She has happily parlayed her love for the weird and the macabre into Black Girl Magic Literary Magazine, finding the best in undiscovered talent in Speculative Fiction.