Review/ The Gentleman #1: Darkness of the Void
0 Comments

The Gentleman #1: Darkness of the Void

Fresh off of a successful Kickstarter campaign, The Gentleman is the latest project from writer Greg Anderson Elysee, whose critically acclaimed Is’nana the Were-Spider has seen the release of two graphic novels and earned multiple Glyph Comics Awards. This new macabre title sees Elysee team up with SFC Comics and Evoluzione Publishing for a clever little horror tale described by the writer as Lovecraftian without the racism. Though just beginning, it looks to be off to a great start.

Focusing on an occult detective named Oliver Solomon who is haunted by his past, this first issue does a good job of fleshing out our lead as well as his world. Somewhat surprisingly given some of the attention paid to it in the marketing of the work, the lead’s sexuality (he is bisexual) does not really play much of a role in the actual work. It’s obviously touched on but only in a very natural way as two of the character’s past relationships each come into play through the course of the story. Of course, in the hands of a talented writer, this is how it should be- there’s no insidious gay or bisexual “agenda” hitting the reader over the head here, as I unfortunately saw some fear during the marketing of the Kickstarter campaign. Just a protagonist who happens to live his life a certain way. I can’t express how much it really saddens me to feel a need to make such a point in a review for a book published in the year 2018 but there you go.

Veltri’s art is a wonderful compliment to Elysee’s story, moody and evocative and a perfect fit for this kind of horror story full of shadowy shrouds. The colors by Pagnotta add to the mix, helping to set just the right mood and atmosphere and making excellent use of textures to bring life to each page. Micah Myers lettering job also deserves praise- far too often with “independent” books the lettering is easily isolated as the place where the money ran out but here it is arguably the most impressive part of the book (which is saying a lot given everything I’ve already said). The creative use of different fonts and balloon effects used for certain out of this world elements really help sell the “out of this world” aspect! All in all the entire package is top notch, and in all honesty, things wouldn’t look at bit out of place if this book had a Vertigo logo slapped on it. This is a great book that is well worth checking out! 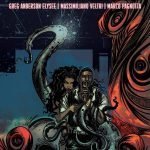 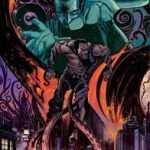 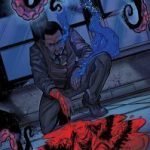