Art and Colors by: Mark Marvida

Published by: FantasyArt Comics, DarkLight Studios and THE POWERVERSE

A repackaging of a title originally published by Fantasy Art Comics and part of Vince White’s THE POWERVERSE initiative, Swag Patrol is the brainchild of writer Rubyn Warren and focuses on a trio of young heroes who gain powers as a result of a mishap at the lab of their teacher and mentor. Something of a cross between classic Fantastic Four or Power Pack on one hand with a strong family dynamic (two legs of the heroic tripod are a brother and sister pair while the third is their cousin) and the classic Wolfman/Perez New Teen Titans with a focus on youthful heroes doing their own thing, Swag Patrol has a lot going for it. It is only hampered slightly by a few minor, but nevertheless very noticeable mishaps that should have been caught by editorial.

The story, by creator Warren with a helping hand from Gabriel Smith, doesn’t break any new ground by any means but does well enough setting up our heroes to get their first taste of action, and does an excellent job of showing them working together as a team. A solid job is done establishing each character and fleshing out their personalities as well as that of the fictional Kongo City that is home to our heroes. Historical/culturally relevant names abound to help give a bit of charm to the proceedings with a Marcus Garvey Park here and a Milestone Arts District there. It’s really a nice touch and such that readers just might mess around and learn something!

Mark Marvida’s art is top notch with clean, smooth lines and a very sleek style. The action scenes really pop and quiet moments are brought to to life with solid storytelling and excellent use of different camera angles. Gabe Smith lends a hand on the first four pages and while not quite at Marvida’s level, his pages are sharp in their own right- it’s worth noting that Smith’s pages, while brief, are a bit better at highlighting that the characters are indeed teenagers. The sole knock (if it can be considered such) against Marvida’s work is that the characters appear a bit too filled out at times. Marvida also provides the colors and they really pop with a nice vivid palette. While done very well, the lettering is where those mishaps mentioned earlier come into play with one rather unfortunate spelling error front and center in the credits on the first page on the title where an error really should be least expected. At least one other grammatical error mars what really is otherwise a splendid book. If it seems I’m being too critical it is only because I feel a book like this, where it is clear the creators have put forth such a strong effort, deserves better than to be let down by what amount to mistakes that should be easily caught and fixed.

All in all Swag Patrol is well worth checking out for superhero comic fans both new and old. It really shines with an old school charm, but is nevertheless very much a book for this generation! 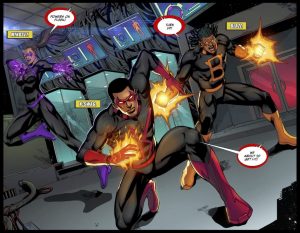