Why you need to check out The Cloverfield Paradox
0 Comments

During last night’s Super Bowl LII,  soon to be world conquering streaming platform Netflix released a trailer for the latest installment in the Cloverfield film series, The Cloverfield Paradox.

The film had long been discussed as being the secret third installment in the ever expanding Cloverfield film universe, preceded by Cloverfield, and 10 Cloverfield Lane. What Netflix did in all of its marketing glory was make the movie available the same night of the Super Bowl. This is huge.  For Netflix to be the sole distributor for one of the most highly anticipated sci-fi films is major. Adding more to that, here are a couple of reasons for why you should be even more hyped to check out this movie. 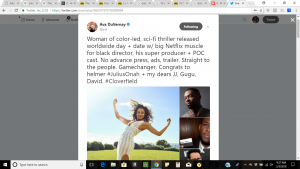