Magic. Monsters. Motorcycles. Did I mention that it’s all in black and white? Crescent City Monsters is a tribute to the old school creature features that used to haunt our TV screens late at night, with plenty of Louisiana flavor sprinkled in. Newton Lilavois has given the audience an entertaining journey into the world of Crescent City and his main character Jonas exemplifies the authors vision of a 1960’s hero. 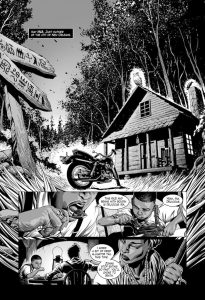 Jonas is a young man growing up in an ordinary way. He has a younger brother who looks up to him and a mother to take care of. He plays guitar in a band, and he is dating a girl he grew up with. Oh, and he can use magic. However, he is not supposed to use this this power, due to it having “a way of causing more trouble than good” as his mother says early on. Magical creatures protect this family and can sense that something foul is in the air.

The artist and author work well with establishing a foreboding mood for the story. It’s truly amazing how well that sense is conveyed without color. One must instead focus on the details of the drawn characters as well as how light and dark play across the various panels. This works well in a scene when Jonas must deal with a racist police officer early on. The weight of the Jim Crow South sets upon the reader as the dark brim of the officer’s hat folds menacingly over his face, partially concealing the villain’s eyes. The sharp angles to his face and the detail and focus on the gun really make the choice of the black and white color palette powerful here.

But artsy-ness aside, we are here for monsters! And here as well, the web comic does not disappoint. Artist Gian Carlo Bernal brings a great vision to his portrayal of the classic bayou monster, the grunch. This group of monsters that Jonas meets is bold, mean, and ugly and it flows artistically from the pages into the confrontational dialogue. The ending is sure to leave one clicking for additional pages as it was unexpected and exciting. If you can’t tell from the review by now, I absolutely devoured this story. The uniqueness is refreshing and sure to keep readers coming back for more. 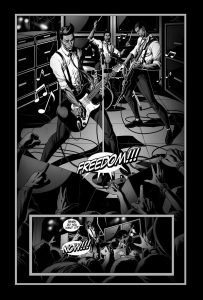